Home »News»Here For Now with Louis The Child

It’s insane to believe that Robby and Freddy just dropped their debut album since they blew up the EDM scene back in 2015 with their hit single, “It’s Strange”. The duo started off by playing at small venues which led to their own tour that kicked off in Chicago. From a PR view point, the strategy was planned flawlessly-it might remind you of Clam’s Casino iconic single, “I’m God”. The track was only available on YouTube for the last 9 years before he recently released it on all major platforms. The guys have since played at major festivals including Lollapalooza, Bonnaroo, Hangout and BUKU to name a few.

The 43 minute album features some of media’s praised artists right now-including Chelsea Cutler, Foster the People and Earthgang to name a few. You may recognize some songs that were already released like “Little Things” and “Free”. The album visualizers should come as no surprise-Freddy has been posting infrared pictures since the beginning of 2020. The color effect that’s so wildly loved was incorporated into majority of the tracklist for Here For Now. Complimenting the infrared, the visuals are accompanied by 3D animations and neon overlays. Check out Freddy’s pictures from Instagram below.

Now that I’ve ranted about the crazy edits, we can move on to my other favorite aspects of Here For Now. The entire album spreads messages of positivity and hope. In light of everything going on right now, I think it’s important we have a creative outlet to turn to. It’s so inspiring having watched Robby and Freddy’s career grow into what it is today. To release such a heartfelt debut project 5 years after establishing themselves as artists goes beyond words. There’s also a sense of gratitude to the several other thousands of fans that have been a part of their journey. Louis The Child has created a community in the EDM world through their music and live performances. When you’re at a live show you feel like you’re experiencing something special through the energy of the crowd-I’m sure the Here For Now Tour will have back to back sold out dates.

Above is the second track into Here For Now, which follows the 34 second intro “Scooter’s Debut”. This short intro is similar to Flume’s work in his first track of Hi This Is Flume mixtape. In other words, it’s the creative spark we need to any chart breaking album. The lyrics to “Scooter’s Debut” are below…

Good morning, ladies and gentlemen
This is Scooter Boswell comin’ at you live on 88.5 FM WALL
We’re here in the cuckoo’s nest just off the coast of elsewhere—
The birds are chirping, the kids are smiling
The kids are sm-sm-smi⁠—
Whether you’re tuned in on your scooter, your speaker system, your car
Don’t you touch that dial

It’s not the first time that Louis The Child has incorporated hip hop artists into their music-flash back to their 2018 hit “Shake Something” with Joey Purp. Coming back 2 years later, the collaboration with Atlanta’s prominent hip hop duo, Earthgang, will definitely catch the attention of Spotify’s most popular playlist curators.

If the infrared ocean waves don’t soothe you in this visualizer, then the overlay of Robby and his mom will (or at least make you stop and have an “awh” moment). You can hear what sounds like an old home video from Robby’s childhood speaking with his mother about becoming a big brother. The lyrics don’t get too extensive but the message is definitely there. “Here, you’ll be okay. Everything, everything’s okay. Gimmie all your love.” Obviously the lyrics are referring to a sense of stability, knowing everything will be okay because I love you and love is enough, home is a person, not a place-pick your flavor.

I could sit behind my laptop all day typing out my opinions on each song OR you can go stream Here For Now on all major platforms. On the official Louis The Child website, there is a feature on the home page where you can play a little game that’s similar to Super Mario Bros while streaming their new music; but of course your avatars are Freddy and Robby. You’ll also find some BTS photos, videos and artwork by clicking around the home page. 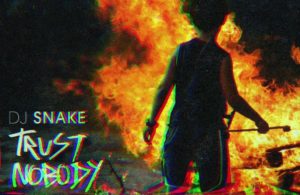 Here For Now with Louis The Child 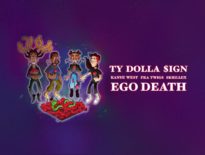 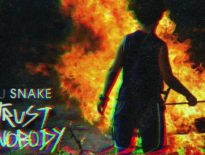