Home »Exclusive Content»New Album From The Weeknd Will Include EDM

In light of his forthcoming album “The Dawn” the R&B superstar hinted that it will include EDM. The Weeknd said in a recent Billboard cover story that this album will be his most perverse to date. Having become one of the biggest artists in the world he has accumulated fans from all backgrounds. Over the years The Weeknd has been known for his genre-breaking sound, and he doesn’t seem to be slowing down.

When it comes to my albums, there is a cohesive sound going on, but I can’t really stick to one style. So you’ll hear EDM, hip-hop and three other types of sounds in one song — and somehow, we make it work.”

The Weeknd via Billboard cover story

This isn’t the first time we have seen this influence in his work. In the past The Weeknd has collaborated with several big name EDM artists. His 2016 album Starboy included collaborations from Daft Punk on the songs, “Starboy” and “I feel It Coming.” The two paired up for an unforgettable performance of their single “I feel It Coming” at the 60th Annual Grammy Awards in 2017. This performance was special in particular because it was the last time the world saw the legendary duo perform together. Starboy would later go on to receive the Best Urban Contemporary Album at the 2018 Grammy Awards. It also debuted at number one on the US Billboard 200, and became certified triple platinum.

The Weeknd also has a notable history with French artist Gesaffelstein. His 2018 album “My Dear Melancholy,” features several dark and electrifying collaborations with the French DJ. Their songs “Hurt You” and “I Was Never There” were among two of all six songs that featured on the Billboard Hot 100. To many’s surprise Gesaffelstien was not the only EDM producer on this album. Guy-Manuel de Homem-Christo of Daft Punk was also listed alongside Gesaffelstein for the song “Hurt You.” In addition, legendary EDM producer Skrillex also took part in the production of the song “Wasted Times.” We’ve also seen The Weeknd and Gesaffelstein together for the DJ’s 2019 album Hyperion on “Lost In The Fire” which quickly became Gesaffelstein’s most popular song to date.

It’s needless to say that The Weeknd’s EDM collaborations have been a huge success. Most recently the singer collaborated with Swedish House Mafia on their new single, “Moth To A Flame.” This was one Swedish House Mafia’s first releases in nearly 9 years, and with vocals from The Weeknd it quickly became their most streamed work to date.

This single once again shows us the capability of The Weeknd’s diverse sound. After it’s huge success it’s safe to say we can expect more of this sound on his upcoming album. With powerful EDM collaborations in the past it will be exciting to see who he pairs up with next on his new album “The Dawn.” 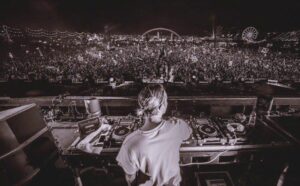 New Album From The Weeknd Will Include EDM 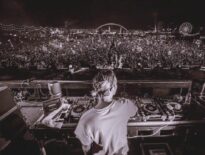