National Entity had a loving spirit in the air with their Valentine’s Day associated show, “Big Love” in early February. Let’s recap the event and relive some great moments with pictures we captured.

The powerhouse Northern California promoter group has a number of events under there belt that have made waves with our Electronic Music scene including: Animalistik, Audio Sunset Music Festival which was a first last summer and massive success, Bass Resolutions and so many more.

We’ve been with National Entity for some years now, covering their events, and growing with them in our area. Seemingly every show they produce tops the one preceding it in regards to lineup, sheer size, attendee energy and overall experience. And their last event, “Big Love” was no exception.

Just days before Valentine’s Day, this event spouted a massive new venue for the regulars that attend National Entity shows here in Sacramento. All the same though, ravers filled this venue to its brim all in anticipation for the huge lineup.

Dirty Audio was our headliner, and an artist we really enjoy watching day in and out, who brings a very diverse setlist in every city we’ve seen him play. Excitingly, he had just released his track, “Run & Go” that has such a great mix of heavy and subtle dance vibes within.

Now preceding our headliner, we had a few acts that were absolutely fantastic and a first for us to experience live. Among that list, Wenzday – who laid down an incredible House-ish set that was an absolutely brilliant in its delivery. Each song transitioned in a way that broke up the rail riders for a moment and exposed them to another segment of Electronic Music.

National Entity’s, “Big Love” was another great show put on by a remarkable team dedicated to bringing the latest Electronic Dance Music to Northern California.

Have a look at some of our photos from the night below. Next up, “Animalistik” with Arius, Phiso, Chime and many more! Get tickets here: TICKETS 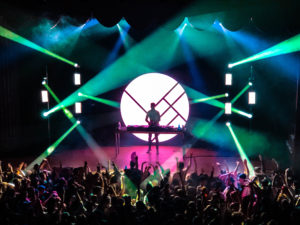 Herobust interview tells us about his influences, breaking down Riddim, and a must-see in Atlanta
“WTF”, “Giant Squiddim” , “Skurt Reynolds” are all tracks by…
News

Interviews Herobust interview tells us about his influences, …
0