Home »Interviews»Herobust interview tells us about his influences, breaking down Riddim, and a must-see in Atlanta

“WTF”, “Giant Squiddim” , “Skurt Reynolds” are all tracks by Atlanta native Herobust, that shook the world of EDM when they came out. Hayden Kramer, aka Herobust, is a master of unexpected. His music is known for filthy and nasty drops that catch you off guard and make you want to mosh until you collapse. His dramatic opening with Jurassic remix of “WTF” at Lost Lands created a buzz around the artist resulting in sold out shows for his “WTF” tour all over the US. We were lucky to catch up with Herobust before his show in Atlanta and talk about his love for Southern Hip-Hop, respect for He$h, good food and Clermont Lounge.

Okay I’ll start with the basics, so what is the story behind the name “HeroBust?”

Honestly, it’s kind of gibberish. I knew that when I was trying to come up with the name, which is very hard, I just knew that I wanted people to have to listen to music if they wanted to judge it, you know, some names, you can hear it as off the bat can be polarizing. You might think, oh, I like that. I don’t like that. But if the name has no connotation, no real meaning then it kind of forces the listener to go by the music, which is what I want.

So at what point did you decide you wanted to pursue music full time?

I finished college, went to University of Georgia, I did pre-med and started applying to schools, basically deciding where I was going to go and just kind of told myself I’m going to take a year to try music, if it doesn’t work I will reapply for school next year. So this is after I graduated and in that year I just made enough progress to feel comfortable to stay with it.

I didn’t know you went to UGA, that’s crazy. What are some of the artists maybe even outside the realms of EDM, Dubstep or Trap that you find yourself getting influenced by?

I love Andre 3000. But in general, I mean, I grew up on Southern Hip-Hop. That does include the Outkast, but also includes everything from Three 6 Mafia to Pastor Troy to Lil Jon, Goodie Mob.

Goodie Mob Played tonight at the Super Bowl concert. So we tried to go by there and it was a nightmare.

Isn’t there another one tomorrow? Because they’ve been doing it all week.

Unless you’ve got a way to get past everything in there. I don’t even mess with that.

Oh yeah, I can imagine.

Yeah. Bass music is always evolving, artists such as yourself are always pushing the limits with the sounds and samples you create, but with that being said, what’s a current trend in heavy bass music that you love, and what’s one you wish would die off already?

I mean obviously Riddim is like the current trend. And Riddim is super cool. What I love about it is… I mean it is called Riddim because there is a very, very simple lead and It’s not about how it sounds, but how you use it percussively. It’s the rhythm that you’re using with that one sound, it is repetitive but if you find that rhythm that just makes you feel it, that for me is special. I think that aspect of Riddim is sick and you really always see it.  Now every genre, once it pops off it gets super maximal and you know, like you had Dubstep and then Brostep and you have like the minimal, like five b riddim and now you have all this like tear out Riddim. It’s almost not even Riddim anymore. So I would never say like oh I want this trend to end and like I don’t like this or whatever because it’s all relative. But I will say it is nice when the four of those trends get kind of bastardized, you know, like what Riddim was at the core was super super good.

How did you come about transitioning from your early styles of music to tracks like “Giant Squiddim,” “Debt ‘n Eight,” and “WTF”?

It was just a really, really gradual process. I don’t think me personally, maybe some artists can choose what they’re inspired by, what they’re not. But for me it’s just what’s around me and my life. And when I first was making beats I was just chilling at home, watching adult swim, smoking weed or whatever. So the music I made was music that was good to smoke weed and watch cartoons to. Right? But then as I started to make it my career, I was in clubs more and so then I was inspired by all this, like the dance floor mentality and the energy of the clubs. So my music just gradually got more and more dance oriented. So it was a very gradual thing just for me spending more time in clubs.

Do you find producing tracks to be an easier process when you’re using samples and presets you’ve made yourself rather than using ones from other artists?

Not to be on any kind of self righteous shit at all, but I never use anybody else’s presets so. You can, you can write great music that way a lot of people do. But for me personally, I know that my strength is in designing those sounds and you apply your preference to every little thing and then  it sounds like you. I just feel like that’s my strength. So I’ve always kind of stuck to doing that.

But can you name some of the up and coming artists that you’ve been following that seriously impressed you and maybe you’ve thought like, damn, I need to add that guy to my set?

For sure! I love He$h. I love his commitment to that life, that Texas Rap vibe.  Right now in EDM there is not a ton of appreciation for Hip-Hop, you know? I listen to rap, when I listen to other music I listen to rap. I know that my fan base is more into EDM Dubstep and stuff like that and I’m sure it’s the same for him, but his commitment to still carry that vibe and evolve these breakdowns and even just the way he is, the way he’s dressed, lhis instagram even, he carries himself like a Hip-Hop act, I just fuck with him. How individual he is.

I’m stoked to meet him in a couple of weeks.So at Lost Lands, you start your opener with the Jurassic remix of “WTF,” the entire crowd, including ourselves, are singing along and loving it. How does it feel to look out at a sea of fans all reacting so positively to something you’ve created?

It was hilarious. So funny. It was that kind of thing, when I made it I knew it was stupid and ridiculous, that I knew it was going to be a moment. Just knowing that I had that I can just walk up and hit play, just kind of watch it occurred to all these people. It’s great. You know what I mean? It’s like telling a joke that everybody laughs at, everybody knows that feeling, when you tell a joke, everyone laughs. You’re like yeaaaah.

And then we all talked about it for the rest of the weekend. That was awesome. Do you think Festivals like Bass Canyon and Lost Lands have a positive impact on heavy bass music and its fan base?

Yeah, sure. I mean, I think it puts everybody in one place. So that’s really cool that all these people that share these common interest that live in different cities, different states get together, party and celebrate something that they like. Especially because in a lot of places it’s not so cool to be into Dubstep or EDM. A lot of these kids are in high school or college or whatever and it may be kind of like socially frowned upon or whatever. And for them to be able to come to a place where it’s just so many people like them. That feeling of belonging that they get. It’s awesome.

I saw you got to serve some deliciousness to your fans that weekend at LL, so what’s a festival food do you think is a must have for any music fest?

Have y’all been to Bonaroo? … the Spicy Pie, that shit is pretty dope. The chicken and waffles at Lost Lands were sick too. Shambhala has the best food of any festival to go on record to say that. I think they got like vegan, gluten free, anything you want. It’s like a super heady festival, so their food is like, on some “woke” shit. It’s great.

Is there a moment, whether on tour at at a festival, that you’ll never forget, that made you think “this is what I do this for”?

it’s hard to say. But every night. The whole experience is so surreal when you play for people every night, no matter how big or small the show is, it’s an opportunity for that group of people in front of you and yourself included, sort of really become like, what feels like a family, you know what I mean? And it doesn’t happen every show. Some shows go off and people rage and they mosh and stuff and they go home and you never really feel that. But some shows, you can just tell people are connected and that feeling is everything. That’s everything.

So last question, with Atlanta becoming a more and more solid choice for hosting major sporting events and music festivals in the South,  what are some spots that you believe people visiting your hometown absolutely can not miss out on?

Clermont lounge. One hundred percent. Clermont lounge. You know what I mean? People will say Magic City and all that. That’s not my thing. I’m all for Clermont Lounge. Also food, man. Atlanta is loaded with good food.Yeah definitely eat good while you’re here. 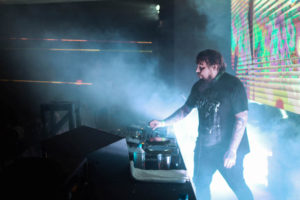 Figure Talks Bass Music, Life & BBQ
As most of you are aware, Figure is known for…
Interviews

Herobust interview tells us about his influences, breaking down Riddim, and a must-see in Atlanta 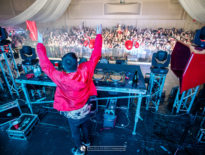 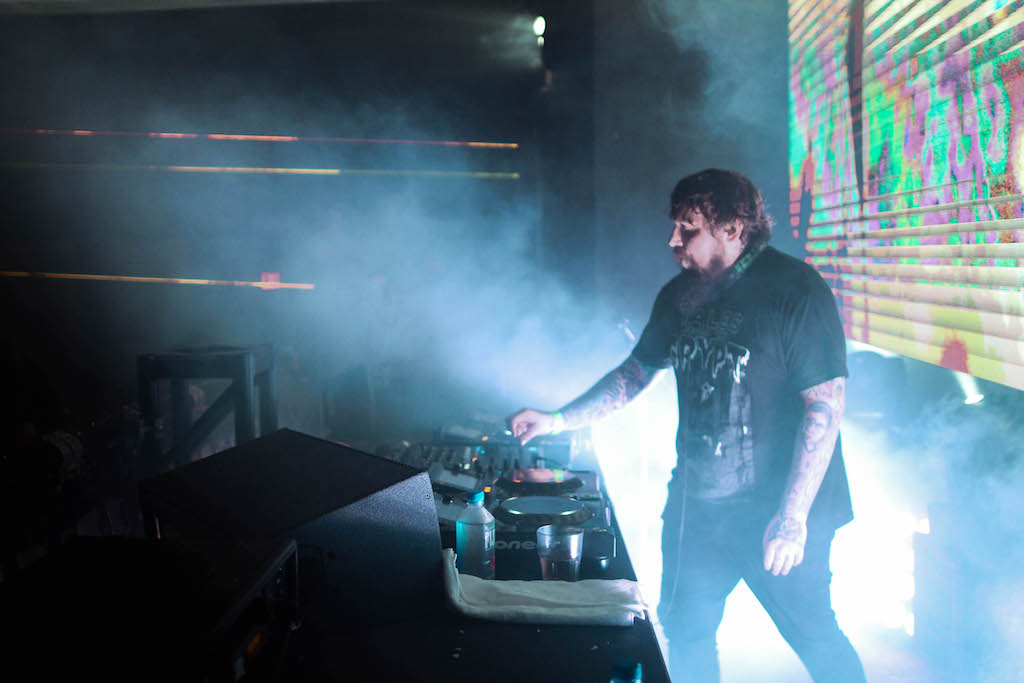