Last labor day weekend Chicago brought some of the biggest names in the house music industry together for a historic weekend. ARC Music Festival at Union Park on September 4th and 5th was an event to remember. Artists from all over the world like Fisher, Eric Prydz, Camelphat, and many more were all members of the iconic line up. 2021 has been a massive year for house music to say the least. Following the West Coast’s all house music Day Trip Festival in Los Angeles, Chicago had to show the world who the house belongs to.

Chicago has a rich history of house music and can be traced back as the birthplace of house music. The 1970’s were the height of the disco movement. With shows like Soul Train, legendary music artists such as Aretha Franklin and The Jackson 5 had a generation of young kids learning the funk and groove that was disco. It wasn’t long after disco that a new sound would come to life. Beginning in the early 1980’s at a club in Chicago known as, “The Warehouse,” house music was born. This new genre and subset of disco became popularized as DJ’s began experimenting with deep bass lines and other electronic music instruments. As disco began to slowly transition out of popularity in the 80’s, DJ’s and mixers stepped up to the plate to revitalize dance music culture.

Who Started it All?

One DJ in particular who is often regarded as the founding father of house music, Frankie Knuckles, was a pioneer in this movement. Frankie strived to be different, and as a black man and member of the LGBTQ+ community in the 1980’s, he did not fail to be different in the industry. Frankie created an entirely new experience on the dance floor. Pushing boundaries with a new BPM rhythm Frankie succeeded in bringing people from all backgrounds onto the dance floor. He made a collective and judgement free space for everyone to dance to the beat, and express their true identities . During this rise in the era of house music other Chicago DJs such as Robert Owens and Felix da Housecat began to bring back the funk of disco in a brand new way. Over the years these Chicago DJ’s and others would go on to spread the culture and sound of Chicago house music all around the world.

40 years later the legacy of house music remains strong and ARC Chicago showed why. The house music we know today has taken on many unique adaptations. As was seen by tech house giants, Camelphat, their deep bass-line sound did not fall short of bringing thousands to the stage. As the sunset on the horizon crept through the trees fans gathered around to hear the masters of their craft perform classics like “Panic Room,” “Breathe,” and “Cola.” The two gave the crowd the music that you literally feel in your soul and the music that ignites the fire in you, and seeing them on stage for the hour and a half they played was an unforgettable moment.

Anyone who knows house music knows the Eric Prydz. Prydz is one of those artists that comes to stage each time with a mission to give fans something they have never seen before. He is very notable for his massive live production value with grand stage designs, bright lasers, and unique visuals that he synchronizes with his performance. Eric Prydz over labor day weekend came to Chicago to give the people both his Cirez D and Pryda alias performances in what was the longest and one of the most epic sets of the weekend. At the techno based Expansions stage Prydz gave fans the Cirez D experience which featured mixes of hits from Adam Beyer, Boyz Noize, and Yan Cook.

ARC Music Festival in Chicago was historic, game changing, and what was arguably the biggest house music event in years. Click the link here for more information and tickets for ARC Music Festival 2022: https://arcmusicfestival.com/ 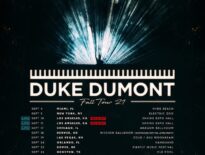